The Age of Do 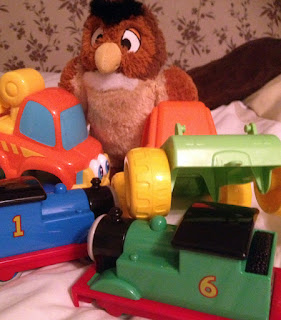 Marty is now deeply ensconced in one of the most memorable eras of childhood development, the age of “Do!” This is where he insists on ‘Doing’ anything and everything; from taking off his shoes and putting on his socks, through to rewiring the DVD player, driving the car and pretty much anything and everything in between.

This would be a wonderful, carefree, period of household harmony if it wasn’t for one little issue; his desire to do in no way matches his ability to do. He’s like the homeowner who insists on undertaking DIY despite not knowing one end of a nail from the other. Fortunately the consequences are not quite as dire; rather than finding himself standing amidst the rubble of a once fine home Marty finds himself caught up in a life that seamlessly flits between cries of joy when he succeeds and floods of frustrated tears when he fails.

In fairness to the little lad it’s actually quite an enjoyable mindset most of the time, providing you give yourself plenty of time. Marty’s favourite “do” is to climb up into the car by himself and then arrange himself majestically in his seat. If you give him three or four minutes he can do this perfectly well and we can then all join together in a round of applause, whilst Marty cries “Did it! Did it!” However, if you don’t have 4 minutes just to get a small child into a car then you’d best buy a bumper pack of industrial strength ear plugs because it’s going to be loud and tearful and I doubt very much if it will be worth the gain of 90 seconds.

One of the most surprising aspects of all this to me is that, despite suddenly being compelled to try his hand at absolutely everything, he can still be reasoned with. A classic example is getting him upstairs to bed.

At the moment he is into ‘Thomas the Tank Engine’ and is rarely more than a few inches away from his favourite toys; Thomas and Percy. He is also into cars of any shape or form. This is all well and good but it creates a logistical problem for him at bed time. He’s happy to sleep but isn’t going to do so unless all of his toys are sat at the foot of his bed so he can lie back on his pillow and stare boggle-eyed at them until slumber over takes him. But how to get these toys upstairs? Well, in the age of ‘do’ this means spending the next half hour trying to pick up all of his toys at the same time, which turns out to be impossible.

If you offer to help at the beginning he’ll just cry “No, No. Marty Do!” and start to bawl. However, if you ask again after 20 minutes he’ll actually pause to consider the offer and then hand you one or more of his toys and say “Daggy ‘elp now.”

Of course reason doesn’t work all the time, in fact it fails dismally most of the time, but as luck would have it there are a few other tricks.

The simplest just works by doing the task in hand for him and then crying "Marty did it!" and giving him a round of applause. If he was in some way involved with the task he'll usually just give you a bit of a hard stare, verify that the task has now been completed and then graciously accept the paudits.

If this fails - and it isn't always possible - I then go for the 'distraction'. This works on the fact that small children are astonishingly gullible. Marty can be clinging onto the side of a shopping trolley, screaming like a banshee, turning odd shades of scarlet and puce and crying out “Marty do! Marty do!” as if the devil himself resided within. The west wing of ASDA turns to stare. Now what do you do? Do you fight it? Do you hide until it’s all over? No! You just calmly point over his shoulder and say “Look! Train!”

It’s as if someone has just flicked a switch; the tears stop, the cries echo down the aisle and are no more and within seconds he’s back to a more acceptable colour.

This works brilliantly if there actually is a train in sight but to be honest it’s not a necessity, “Look! Plane!”, or “Look! Lion!” all work just as well. To be honest I think “Look! Nigel Farage!” would work... and if said it in a pronounced Scottish accent you might get to enjoy an even more comical reaction from Farage himself.

Posted by Andy Blackwell at 21:36 No comments: