I have come to the conclusion that the age at which a child is deemed to be able to ‘talk’ has little to do with the intellect of the child and an enormous amount to do with the imagination of the parents. You hear it all the time:

In the sense that he rarely shuts up from the moment he wakes up to the very second he drops off to sleep, Marty can be said to ‘talk’. But is he talking English? Well if he is I fear he must be Scottish because what comes out of his mouth makes little or no sense to me at all.

His favourite word for many months was “G”, and to be honest it’s still a popular choice. I was rather hoping that this would be the start of a systematic approach to language and that he’d slowly acquire more and more letters of the alphabet until one day I’d arise to be greeted by my lovely child asking “If papa would care for a cup of tea and a digestive?”. Sadly, this was not to be. Instead Marty has opted to articulate a series of seemingly random words and phrases and the trick as a parent is to try to figure out quite what it all means – if it means anything at all.

“Aggy Ann” is a popular phrase and one that took us a while to solve. It turned out that the young lad was merely displaying all the diplomatic tact of his father, in that he waited until Mother’s Day before he started shouting it out as loud as he could, a look of profound concentration on his face as he did so. This of course was fine, right up to the point we realised that he was trying to call his mother “Aunty Leanne”, a phrase he’d picked up from his 2 and 3 year old friends who compete to see how loudly they can scream this the moment Leanne enters their home. Needless to say his mother was less than impressed, not that this has dissuaded him one iota.

“Ikea” is another favourite but we haven’t a clue what it means. I grant you that he might be talking about the famous store of that name but I think the odds of a 1 year old child taking a keen interest in flat-pack furniture is pretty slim.

To be honest I think GCHQ would have a hard time deciphering most of Marty’s remarks. Often the only clue you get is when he tries to sing the lyrics to songs – you might not recognise the words but you do recognise the tune. This favourite song sadly belongs to that vile, purple dinosaur “Barney” - a loathsome creature with a horribly catchy tune.

It’s Leanne’s fault that Marty latched onto the song “I love you, you love me...” as she spent most of the journey from Kent to Lincolnshire singing it too him. Of course Marty has played around with the lyrics a bit: “I ya.... G, Eee ya.... G, ayy, eee, aya, aya... G.”

Elton John eat your heart out!

But what about ‘Mummy’ and ’Daddy’? Of course these are the ones you really listen out for and he does use them quite regularly - which is hardly surprising since we’ve been repeating them too him, ad nauseam, for months now. Sadly he doesn’t seem to associate anyone or anything with the words yet – He’ll often shout out ‘Daddy’ when I come home from work but just as I turn to him, delighted in having been recognised, he’ll turn to the fridge and greet that as ‘Daddy’.

Oddly enough, whilst his enunciation might be minimal, his understanding of what you say to him is pretty impressive. When he was just 6 months old you could ask him “Where’s Tigger” and he’d immediately start looking around for his toy, pick it up and wave it at you in triumph. I found this as worrying as I found it astonishing and have tried my level best to moderate my language around him ever since... with limited success.

I’ll just die if his first real, clear, unequivocal word is “Bugger!”
Posted by Andy Blackwell at 21:17 No comments: 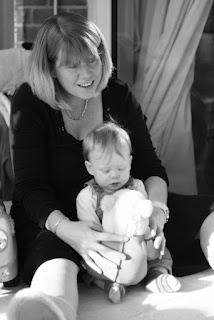 I thought baby illnesses worked like this...The tiny tot is born into the world with very little immunity other than that supplied by the mother via the placenta. As he or she drinks their mother’s milk more immunity is passed on from the mother. However they are still very susceptible to things like the common cold and so will get lots of them in their first few years. Meanwhile mum and dad will smile on serenely in the full and certain knowledge that they are already immune to that variant of the common cold.

Alas, it turns out that that is all a load of bollocks! Ever since Marty entered the house we have all of us been going down with colds like there’s no tomorrow – I have had more this year than in the last decade!

How come? I can understand that Marty will catch everyone of the 100’s of different cold viruses floating about the place but by now I should have built up immunity to 80% of them, surely? Yet every time Marty has caught a cold the entire house has gone down with it. Instead of sharing my home with a cute and cuddly bundle of joy I appear to sharing it with a 2ft tall bio hazard!

Ok, I can understand the mechanism by which I might catch one of his colds. He has a nasty habit of waiting until my face is about 3 inches from his own and then - with absolutely no facial clues whatsoever - sneezing. I’m no medical man but I’m fairly sure that having your face regularly drenched in snot and phlegm is a sure fire way of picking up infections – as well as offering Marty some mild amusement. But surely I should still have immunity?

My only conclusion is that there are two distinct types of cold; the common cold which floats around in the air, and the kiddie-cold, a virus which resides in flooring. As we grow up we get fewer and fewer kiddie-colds because we’re growing away from the source of infection. However, add a toddler to the home and things change; the toddler picks up the cold from his close proximity to the floor, and then shares the joy via unprovoked sneezing.

It all makes perfect sense. In fact I may contact The Lancet with my medical breakthrough.
Posted by Andy Blackwell at 20:37 No comments: