It’s an astonishing fact that there are now about seven billion people inhabiting this planet. That’s seven thousand million of us! And what’s the most amazing thing about this – other than that there are an awful lot of people having an awful lot of sex? Well, it’s that every single, solitary, one of those seven billion people had, from the age of next to nothing until at least 4, an uncontrollable urge to try to kill themselves! How on earth did we reach seven billion when every single kid on the planet seems to have been born with a death wish?

Take young Marty as an example. In the early days, when an inability to move much tended to cramp his style, he would contentedly dice with death with mundane acts such as choking on his own vomit or trying to eat his pillow. However, once he’d learnt to move, a world of opportunities for an early demise where his to grab... or suck, or poke, or eat.

Put him in a room filled with soft, cuddly, perfectly safe toys and he would, within minutes, be throwing Tigger and his sidekicks aside and making a bee-line for the electrical socket in the corner of the room where, if left to his own devices, he would spend the morning trying to get the cover off so he could electrocute himself in spectacular fashion.

We recently returned from our summer holiday – We went to Wales so treat the word ‘summer’ in its loosest possible sense. On the very first day Marty managed to almost knock himself out by running head long into the dining table, a collision that resulted in him sporting an enormous black eye for the whole of the holiday.

Not content with concussion he diligently went to work on the gas fire – which, despite being a ‘family’ caravan home, didn’t actually have a fire guard. We spent hours building elaborate barricades around the fire and Marty spent hours trying to thwart our defences. On the last day of our stay, whilst his parents were busy packing everything into the car, he finally broke through and achieved his holiday goal – he got burnt!

As I write I can hear the battle going on between him and his mum; she wants to cook dinner, he wants to climb into the oven! I tell you now, if we all followed young Marty’s guide to health and safety there should be no more than about 20 of us on this planet... and 9 of those would be in hospital at any one time.

Posted by Andy Blackwell at 21:32 No comments: 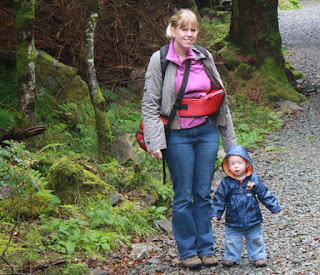 Posted by Andy Blackwell at 21:18 No comments: