One of the best things we ever did with Marty was “baby led weaning”, whereby you feed your little one proper food and let them manage the process themselves.

There were a number of reasons why we thought this approach would be a good idea. Firstly it was cheaper and easier than buying or making your own mush. Secondly, who in their right minds would voluntarily eat said mush? Surely, if you want your child to have a sound and sensible approach to food, it makes sense to feed them something that you’d at least consider eating yourself? Thirdly, letting them feed themselves rather than subjecting them to a ‘force feeding’ regime seemed eminently sensible, not only would it increase manual dexterity at an early age but it would also let them decide how much they wanted to eat by listening to their own bodies rather than demolishing a jar of pureed ‘God-knows-what’ because ‘mummy bought it, so you’d better eat it’. Finally, letting Marty sit at the table and join us for dinner was just a hell of a lot easier and more pleasant for all concerned.

We got a surprising amount of negativity when we decided on this route. The health visitor felt that Marty might not get enough to eat if he just fed himself and stopped when he liked. We suggested she take a look at the herds of obese people waddling through town and ask herself if the current approach to food seemed to be working.

Other people took exactly the opposite stance and warned us that they’d seen this approach in action and that our child would get fat and eat rubbish. Bearing in mind that we weren’t giving Marty a debit card and freedom to roam around the local supermarket it seemed unlikely that he’d eat rubbish unless we actually gave it to him, but yes maybe you do need to state the obvious caveats to a life of ‘baby led weaning’, namely that you eat a healthy and balanced diet yourself – and no that does not mean a burger in one hand and a coke in the other – and that it is only ‘baby led’, you’re still the adult, so you don’t have to follow; I dare say that – if left to his own devices - Marty would love to gorge himself on chocolate coated poppadoms, smothered in strawberry jelly and topped with treacle sponge cake... but that doesn’t mean he’s going to.

The final warning came from my mum and I suspect it’s impossible to embark on a life of baby led weaning without these words of ancient wisdom ringing in your ears, “He can’t eat proper food! He’ll choke on something and die!” I’ve no idea where this wisdom arose from. Yes, babies might look a bit awkward when feeding themselves and they may well occasionally choke but this is natural, so much so that the gag reflex in a six month old baby is highly developed and very close to the front of the mouth. You still need to make sure they’re sat upright and never left on their own when they’re eating, but that aside it seems perfectly safe – we didn’t have a single problem.

Marty has now turned two and we seem to be seeing a number of huge advantages from BLW that we’d never been told about, all revolving around his dexterity.

He can now eat yoghurt and jelly from a pot, with a spoon, then turn and have a drink from an ordinary cup.. and barely spill a drop! Ok, you wouldn’t want to hug him afterwards whilst wearing your best Armani suit but there was a time when he just looked like a small, animated, mound of yoghurt by the time he’d finished eating. Those days are definitely behind us and the advanced dexterity seems to have affected things you wouldn’t generally associate with eating; he learnt to jump off the ground – clear off the ground – within a few weeks of his 1st birthday. He already skips down the road. He’s a demon on a scooter. He can put bottle lids back on and take them off. He’s just starting to brush his teeth in a fashion that might actually prevent tooth decay – he was just sucking off the toothpaste.

Ok, it might all just be a coincidence that he’s quite advanced in all these areas but they all share a link in that they require, brain, eye and body coordination and that’s exactly what Baby Led Weaning promotes. All in all I'd very much recommend it.
Posted by Andy Blackwell at 21:20 No comments:

The Changing Face of Childrens Toys 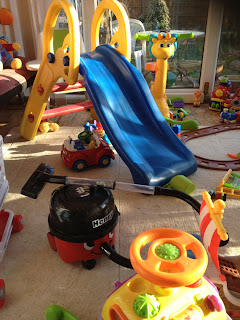 It’s very easy to overlook those slow changes that occur throughout your life. Then suddenly something happens to throw them into stark relief.

A classic example of this was the TV drama “Life on Mars”, which brought back to life those decades that you had somehow managed to muddle through without constant access to a mobile phone. The days when you left your home and, once out of ear shot, became ‘uncontactable’. And yet we still managed to function. We even managed to meet people! How did we do it? I seriously can't remember and I certainly don't know how I'd manage today.

Another example of this phenomenon was this Christmas and birthday with Marty.

He’s now two and even though he’d be just as happy with an empty cardboard box we felt obliged to fill said boxes with gifts. When I was two this would have meant a cowboy hat, a little holster, possibly a loud checked top with leather tassels and definitely a very shiny handgun. The kid down the street would then acquire an American Indian outfit and we would happily spend the summer months acting out those genocidal events of yesteryear.

Now I must admit that the idea of giving Marty a fake gun doesn’t sit very well with me these days but I had absolutely no problems with it whatsoever when I was a kid. All the TV shows seemed to be Westerns and it made perfect sense to a kid of my age that you should spend the day pretending to ride around on a horse shooting the indigenous folk - who would then wholly overreact by shooting back.

So I was not expecting Leanne to arrive back from the shops with a six-shooter. However, what I also wasn’t expecting was the tiny shopping trolley, the baby ‘Henry’ vacuum cleaner and the little plastic cooker, complete with pans, and polyethylene fried egg and bacon set!

Seriously! This is what we bought him... Actually, no, this is what my wife bought him! AND no one else blinked an eye! I was standing there a gasp, as everyone else crooned over how cute he looked dragging his little vacuum cleaner around the house, shouting “Oover! Oover! Did it”

I attempted to explain to my wife that these all seemed to be slightly effeminate toys and that maybe a Scaletrics would be a good idea, or failing that a train set , which I could no doubt look after for him until he had ‘come-of-age’. From the look she gave me I might as well have been talking to her in Swahili.

Apparently he loved playing with the house Hoover so – ergo - a toy Hoover was the perfect present. I pointed out to her that he also loved playing with his willy, so how come she hadn’t bought him a plastic one of them? But it was all to no avail.

That said, yes he does seem to enjoy dragging a plastic Hoover around the house and, yes, he loves playing with his plastic ‘Eggy’, he even enjoys pushing his little trolly around the house. I’m just hoping he’ll grow out of it, but apparently that’s a sign of my age.

Posted by Andy Blackwell at 22:25 No comments: